Check out the Impala's book from Shutterfly!

Lost internet service coming through the mountains while I was working on the blog yesterday so the last post wasn't finished when I posted it.  Now it's done so check it out!
Posted by Emily at Saturday, July 14, 2012 No comments:

Well this was an unexpected day!

We left the KOA in Holbrook, NM with a plan of getting to Hole-in-the-Wall Campground in Mojave Desert National Preserve.  That's not exactly what happened though.

It was a hot one!  And we had to go up through the mountains.  We had been warned over and over again to cross the Mojave Desert at night, but we didn't fully realize that long before you get to the official Mojave Desert, there is more desert that is just as hot and just as horrible.  It was pretty brutal and we were debating whether or not we would even be able to camp that night, not to mention when we should get up and cross the rest of the desert.  To make matters worse, we were climbing up and up through lots of mountains and Bessie's (the '62 for those of you who haven't heard her name before) water temperature had climbed up to 220 degrees. 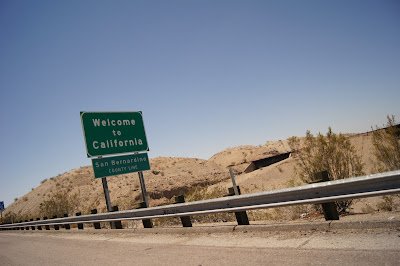 We somewhat reluctantly decided to stop at a Visitor Information center in Needles, CA.  When we walked in, the thermometer said it was 112 degrees outside.  The ranger, Merle, was a native to the Needles/Mojave area and said that his family had made the trip dozens of times in non-air conditioned cars during the 1960s and 70s.  He also said we'd never make it if we kept driving today, it was about 1:00 pm - the hottest part of the day.  He said the car would likely overheat and we could be in serious danger because of the extreme heat.  We asked for his advice and he told us that we should go right up the street, get a hotel room, get in the pool for a little, have dinner, and go to bed by 9.  Then, we should get up in the morning and leave by 4 am to make it across the desert before the heat got too bad.


We decided to take his advice since we weren't really sure what we were getting into.  We got a room at a Super 8, went in the pool, and had dinner.  I also got a phone call with a job offer for those who haven't heard yet!  I was offered a stipend volunteership with the Chesapeake Conservation Corps through the Chesapeake Bay Trust.  Starting at the end of August, I will be working for Maryland Department of Natural Resources doing environmental education and watershed restoration.


For anyone that hasn't been across this part of the desert, I am going to go ahead and reinforce what everyone told us to do - drive across it at night.  The heat is indescribably oppressive.  The fire air feels as though it's capable of burning your skin as it blows across it.  Your throat and lips are continuously dry, no matter how much water you guzzle.  The land is desolate and frequently deserted when you leave the interstate.  My next bit of advice is to take old route 66.  It's about 10 degrees cooler than the interstate because there are very few cars and no tractor trailers and it is a really fun, scenic, and interesting drive.  Other travelers have done their best to make the drive even more interesting than the interstate - a stranded shoe pile on the side of the road and names and messages spelled out with white stones along the road.  The drive was well worth the extra night in a hotel and may have given us some of the coolest pictures of the Impala...until we got to El Mirage at least, but more on that later. 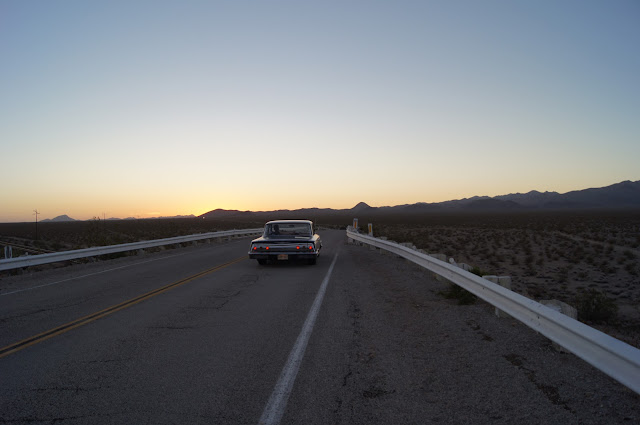 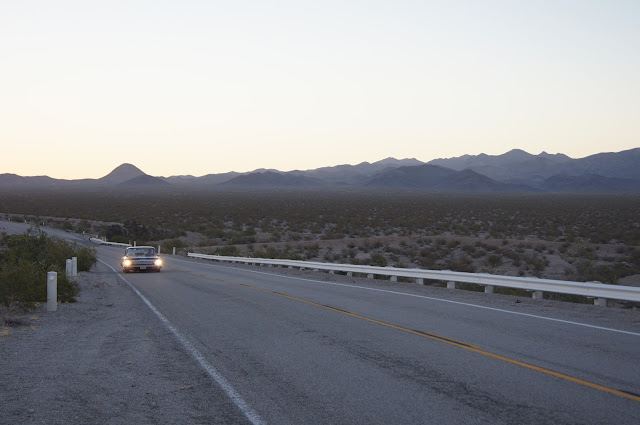 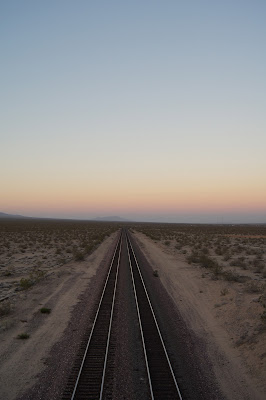 We also decided to make a stop at Amboy Crater.  We didn't really know it was right there, but after seeing all the lava rocks for so many miles, we decided we might as well.

Our next stop was El Mirage.  Since Bonneville was a little out of the way for the route I had planned, I suggested that we go to El Mirage like they did in Deuce of Spades.  We didn't really know what to expect.  We had no idea if we would be allowed to drive out on the dry lake bed or if there were special rules and regulations about what could go out there.  We didn't know if it would be crowded or even open since no event was going on.  We just decided we'd go there and see what we could see.  When you get off the highway to go to El Mirage, you pull into a decent sized town and you kind of think is this really where El Mirage is?  But the direction tell you turn after turn and eventually you end up in the middle of this wide open desert full of Joshua Trees (and power lines).  I was really thrilled that we got to see so many Joshua Trees.  Joshua Tree National Park was something I kind of wanted to see, but it just didn't make the cut for the trip.  Even without going to the park, I think I saw my fair share of these neat trees.

We made a left onto El Mirage road and after a few miles, there it was on the right.  We stopped for some pictures and then headed to the visitors center to find out what we could do there.  The lady there was extremely nice and after showing us around and listening to why we were there, she gave us a free two hour pass to go out on the dry lake.  She said, "you can go as fast as you want and do whatever you want, but we ask that you don't drift."

Driving on El Mirage was awesome.  At first it seemed like we weren't going to be able to drive very much because it was a little bumpy, but once you got out there a little ways, it smoothed out.  After making a few passes, we decided to see how far we could drive out, how close we could get to the mountain beyond the mirage of water.  But it seemed like the further and further we drove, the further away the mountain got.  We turned around to head back, having decided we would never reach the mountain.  Now that we were facing the opposite direction, there was another mirage of water ahead of us.  The woman at the visitor center told us that the mirages can sometimes become pretty miraculous, at times looking like a whole city out there.  We were used to water mirages, having seen them on the road on hot days, but this was really weird.  A large black bird was flying across the mirage water in front of us and somehow there was a reflection of the bird in the water...the water that wasn't there.  It was really amazing and just mind blowing. 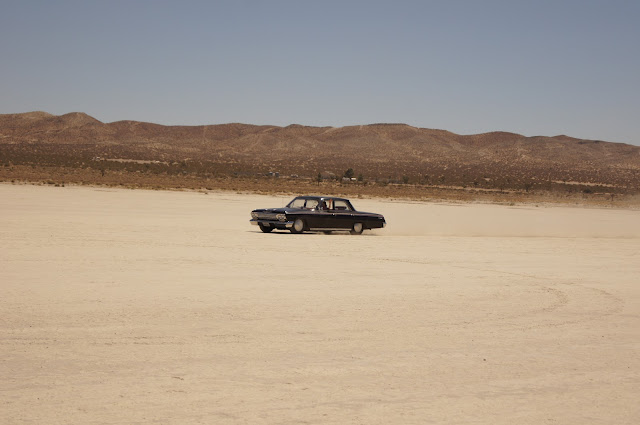 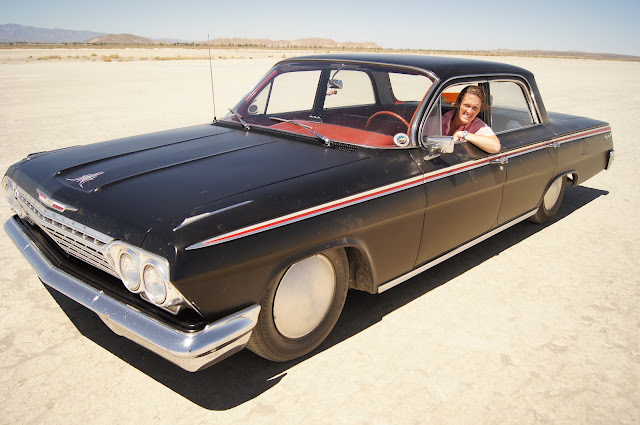 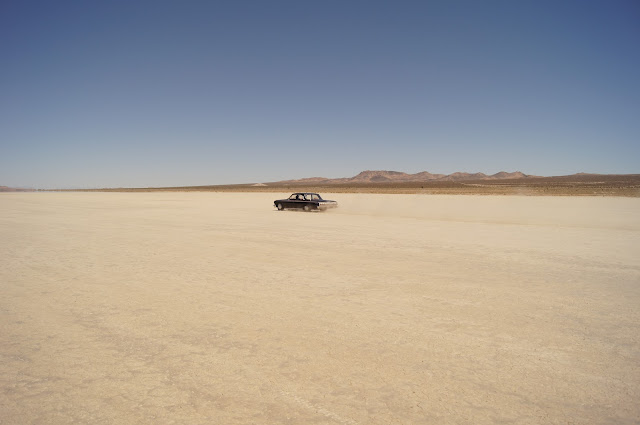 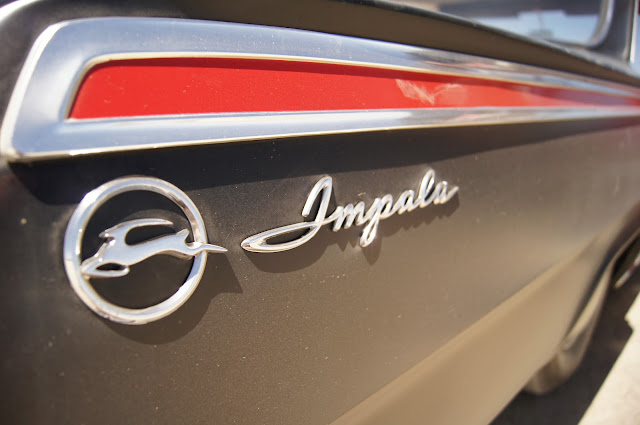 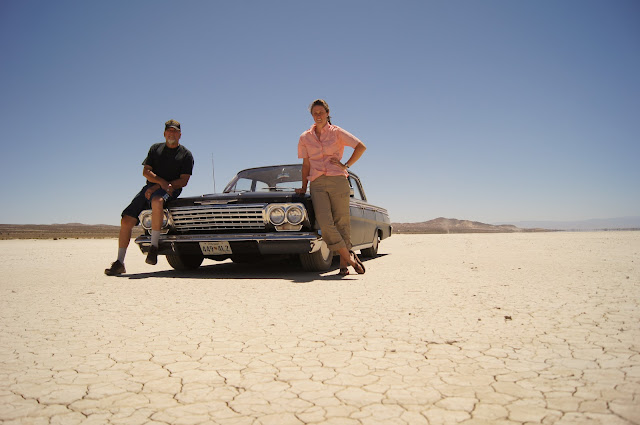 After El Mirage, we drove the rest of the way to Pomona and checked in at the hotel.  Then, we went to the Big Boy in Burbank for the local weekly car show - which apparently Jay Leno sometimes shows up to, though not that night.

Someone at the Big Boy told us that Barris Kustom's (creator of the Batmobile amongst other famous cars) was right down the street so we decided to stop there to check it out.  We could see George Barris inside, but he motioned that the shop was closed.  Inside were tons of celebrity and celebrity car pictures as well as some of the cars he's created.  Also, he drives a green and gold panel painted Prius which looks pretty cool, but unfortunately I couldn't snag a picture of it.


More updates about Los Angeles and San Diego coming up soon! Then we head north!
Posted by Emily at Friday, July 13, 2012 No comments:

Oh man is there a lot of catching up to do! I never thought keeping a blog during this trip would be so difficult.  Everyday is longer than your average day, there's often not internet access and when there is, all you want to do is relax!  Dad says I've got to get the show on the road and keep posting though for everyone (anyone?) that's following.

We left Albuquerque, New Mexico on June 20th and headed for Gallup, NM (historic route 66 recommendation by Dr. Lewis) with the day ending outside of the Petrified Forest National Park in Arizona. 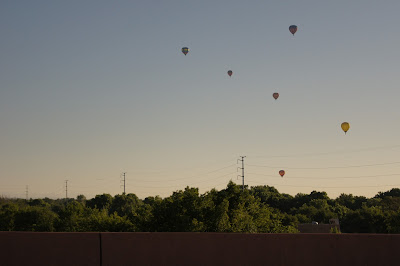 Our first stop was rather unplanned.  We hadn't even thought about the fact that we were crossing the continental divide - I think we'll be crossing it two more times as we head East.


In Gallup, we arrived just in time for a walking tour of the town.  We learned a little about the town's history as a rough and rowdy cowboy town and how it became a central trading post fort Native American goods.  After the tour, we went in a few of the stores, including Richardson's Trading Co., which is practically a museum and quite unaffordable.  There was a room solely for Native American rugs, many of which cost over $6,000.  We also visited Sammy C's Rock N' Sports Pub and Grille which has been named one of the best sports bars in the U.S.  We didn't eat there, but the quantity of memorabilia was unreal.  Lastly, we stopped in El Rancho Hotel - a really cool, old hotel that many celebrities have visited over the years.


From Gallup, we headed for Petrified Forest National Park in Arizona, passing through the Painted Desert on the way.  We drove the loop through the park and stopped at just about every overlook there was.  We were considering going on to our campsite in Holbrook and then coming back to do the park the next morning, but it turns out we timed it perfectly (on accident of course).  We got to the Petrified Forest in the late afternoon so the temperature was cooling off and the sun really lit up and shadowed the rocks in interesting ways.  Needless to say, it was still quite hot and we still got quite sunburned.  Note to self, altitude is just as important as time of day. 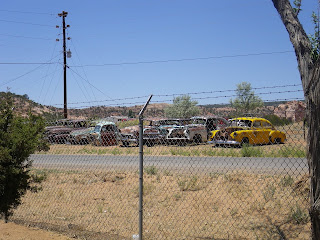 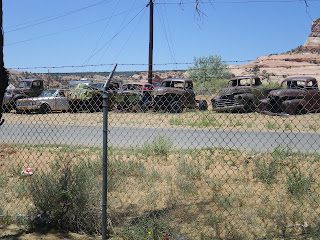 We camped that night at a KOA in Holbrook.  Dad had another unsuccessful night camping...who knew the light in the middle of the campground wasn't going to go out? Perfect.